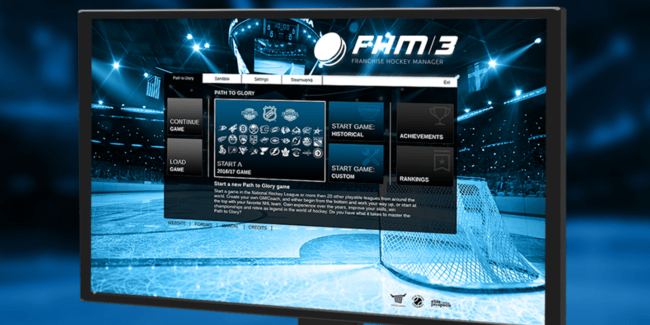 FHM 3 is now available for download. We are including details from the OOTP developments Press Release. General Manager (GM) Games intends to have a review as soon as possible. In the meantime, have a read on the new features with some slight alterations on the adjectives used by OOTP marketing.

OOTP Developments today announced that Franchise Hockey Manager 3 has shipped and is officially licensed by the National Hockey League (NHL) for the first time in FHM’s history. The NHL license allows all teams in the game to have real logos and uniforms for an authentic hockey experience and removes the need for player and jersey mods.

FHM 3 includes some of the following features these features:

GM Games News
Since 2011, General Manager Games is a media organization focused on sports AI management games. Our followers are a community that perform the role of a ‘Sports General Manager’ aka GM. We are inclusive of all developments and companies designing games that best simulate this reality experience through technology solutions. GM Games is the source for sports simulation games.
Average User Rating Write A Review 2 User Reviews
7.8
90 votes
Rate
Submit
Your Rating
0