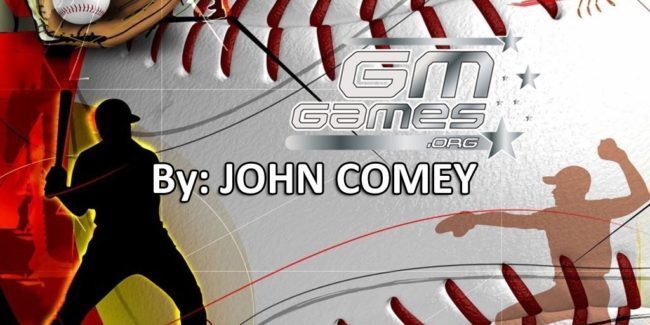 I’m a virtual virtual sports community lifer.While I was unaware of the vast world of mail leagues (that’s antiquated, your-grandpas-snail-mail mail leagues, where you rolled dice to see who got a hit, not hit a button), I became quite in tune with the world of online sim gaming.  My first taste, which happened to be the only online league run by OOTP dynasty legend DreamTeams, came in December of 1998.  I was a freshman at Bloomsburg University, and being a freshman that spent the majority of my time at the Rec Center and not at the frat houses, I had a lot of evenings to kill.

Finding the MLEB (Major League Electronic Baseball) filled a creative void.  I took over the league a year later, and then merged with another league, moving to High Heat as the base, in 2000.  That league, the eMLB, still runs today.  It is one of the longest-running leagues around, with a core of guys comprised of those two leagues from fifteen years ago.Throughout the years, that core group has engaged in several ventures together, including a couple I have been fortunate to run.  One, the American Baseball League, was a bit ahead of its time; it had a history played out before we took over.  The owners helped shape the course of events, adding in players they had enjoyed watching throughout their own solo leagues.  It was a very simplistic, very successful league, predicated on the axiom that immersion draws people in.  It is a virtue by which the most successful leagues operate; if you don’t have a fourth wall, you’re going to soon realize that you’re just playing a computer game.

Other concepts have had various degrees of success.  However, one idea had long been on my mind.

In 2001, while suffering from summer classes and pneumonia, I began to piece together the idea of running a complete sports world, along with an ESPN-esque site, to keep everything together.  Eleven years later, that idea is closer to fruition…though it is still a long ways away (having a pro and college football sim combo would go a long way towards alleviating that problem, to any developers reading this).

However, I have been fortunate enough to encounter, join, and immerse myself in one league that is achieveing such an endeavor.  That league is MLBPro.

The league, formed in June, has embraced the day-by-day model.  It has a very dedicated core of owners who participate daily; some write articles about their team.  There is a chat room on the website (shill alert: http://www.mlbpro.net) that is generally always busy.  There are nightly live sims using OOTP‘s tidy Live Sim feature.  There is a podcast or two, run by yours truly, as often as possible.

Rivalries are formed. Bonds are made. Competition is fierce.

The beauty of this kind of league is that you can basically select your level of participation.  If you want to micro-manage your team in every facet, and utilize the seven-day lineups, as well as chec

k the waiver wire and your minors every single day, well…that’s how I run my group of gritty Phillies.  If you wish to be more laissez-faire in your approach, well, you can check in every few days.  There’s a mix of both in MLBPro; however, there is no shortage of participation.  The league is operating at 85% league participation (in this case, that means multiple exporting each week); this will grow shortly, as the inevitable new blood enters the league to replace those who discover this format isn’t for them.

To that end, I recommend trying any format you think you may be even remotely interested in; you never know what may click for you.  Some like the pace fast, and seeing their plans come to a quick resolution.  Others prefer building the story.  I’m generally in the latter camp, but it took me awhile to understand that.

If you are someone that loves talking trade, well…I can assure you…this league is for you.  I have never witnessed a trading deadline like this one.  It honestly felt like what I imagined the real deadline to be.  I turned three deals myself, moving Cliff Lee for several players, while securing a couple of smaller deals in the process.  I’m still processing all of the news from that day for a column this weekend.

Anyway, while this, my introductory column here at GMgames, has somewhat devolved into a shill for the league in which I play, there are two bigger points to make:

1) We are heading towards the day when our gaming environment can mirror the current news environment.  The day of a collection of guys getting together, each taking a sport, and creating a universe in which all of the sports exist on the same plane, and people operate under that working premise, is coming.  And it’s coming sooner than you think.  For those of you who have had a chance to read Tiger Fan’s breathtaking multi-sport dynasties at FOFC or the OOTP forums, you know just how incredible such a concept can be, when done right (and that’s the underlying point…if you’re going to do a project, any project, you can’t do it halfway).

2) If you are new to the community, and we are currently in the ebb-and-flow of seeing more new blood enter the atmosphere than in the past, play around with many different formats, before deciding what is your wheelhouse.  You may surprise yourself.

And, while you’re deciding, stop by MLBPro, and say hello.  You may decide to stay awhile.

John Comey
John Comey has been in the sim gaming community for nearly twenty years, and has justified his bachelors in journalism by writing close to 5,000 pages worth of content for his online leagues over the years. He has been the creator of several failed blogs, as well as a LiveJournal or two...not that there's anything wrong with that. He is also the author of the worst technical manual in gaming history (Total Pro Football). He has collaborated and contributed to products with Wolverine Studios, Grey Dog Software, and Out of the Park Developments. Comey now lives in Mystic, CT, home of the world's oldest drawbridge, as well as thousands of Long Island tourists. He is the recent target of a box-and-one defense in a 35+ basketball league. You can find Comey in social media...but good luck finding him. He thinks he has a Twitter, but is hazy on what it is, exactly.