MLB Pro is a baseball simulation league that runs on the Out of the Park engine and will serve as our flagship league in the pursuit of expanding our stable of cutting edge leagues, as well as raise the bar for new leagues being formed in the entire sports simulation community. Most notable is the ESPN style website created to handle journalistic content from all General Managers. 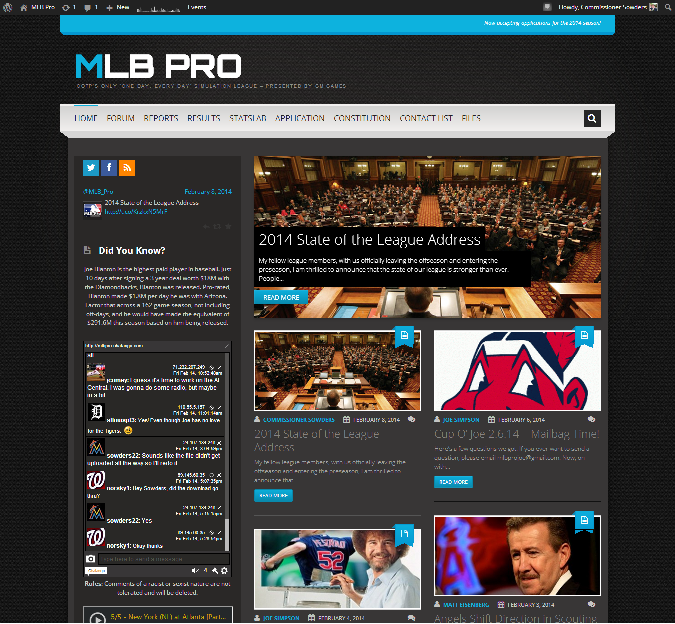 MLB Pro was created in June of 2012 with a single overarching mission: create the most immersive simulation league and through that, come as close to replicating the real general manager experience short of earning a paycheck. It does this in many ways but the most of all is it is the only league to sim one day, every single day, replicating the MLB schedule and the MLB pace. General managers live and die by every day instead of blazing through the season in a few months and only caring about the result of the season.

MLB Pro is so much more than a unique sim schedule and that is the reason why we are so proud to have it as our flagship league. MLB Pro also has the most supplementary material of any league. Twitter is used extensively, from a league account to a trade rumors feed, not to mention most of the teams operating their own Twitter accounts. MLB Pro Radio is the umbrella of radio shows about the league, from ‘The John Comey Show’ who keeps you up to date on news of the league, to the ‘Jabs’ Game of the Week’ with play-by-play by Justin Jabs. MLB Pro also has beat writers for every division and a league for of GM who write articles about their teams. The league also watches all of the games live through OOTP’s real-time sim feature.

MLB Pro has also incorporated the Nippon Japanese Baseball League. General Managers on the waiting list are given a team in Nippon and they compete against the rest of the waiting list, fighting to have the best record when the next team in the MLB opens up. While they do this, they spend the time getting comfortable with the league and its members, writing articles, and joining in the festivities like any other general manager. Nippon is no second-tier system here.

“The staff at MLB Pro and it’s General Managers provided the perfect playground to make a cutting edge website to best simulate a SportsCenter ESPN themed website. We feel this next level of league management adds a dimension and fun factor that is unparalled in the baseball simulation community. More importantly we bring a great group of managers to our community and forums that will help continue to make GM Games the destination to read about and talk sports simulation.”, said Chris Valius, Web Admin and Founder of General Manager Games.

Commissioner Andrew Sowders of MLB Pro says “MLB Pro is a labor of love and anyone who shows the same passion and aspiration is going to have my attention. Chris not only has that passion for GM Games but shares the same vision for MLB Pro and sees the franchise it is and can be. Chris understands what makes a good simulation league, the potential they possess, and I couldn’t imagine a more perfect home for MLB Pro or any other league.”

MLB Pro is the finest league going and a magnificant ambassador for OOTP is and what it can be. GM Games could not be happier about our partnership. We have no doubt it will be a beneficial one for all parties.

MLB Pro can be found here: http://mlb-pro.com
MLB MLB and Baseball Simulators MLBpro Online League News OOTP OOTP Developments
Chris Valius
My name is Chris and I am the of Director of General Manager (GM) Games. I have been following sports simulator algorithms from my childhood. It initially started out by pressing simulate on 'Baseball Simulator 1.000' and having excessive rental fees on games like 'Baseball Stars' on NES. It evolved in to playing countless seasons of Tecmo Super Bowl without even playing a snap. Wayne Gretzky Hockey on PC/Mac allowed for the first 2D game-play to be watched in conjunction with being a GM. As time progressed, Baseball Mogul, and the original OOTP grew and the CM series of Soccer games took everything to the next level. With that in mind, it has been my mission statement to find those with the same passion for this genre and share the incredible intelligent accomplishments of those making these algorithms for the pleasure of our amusement. I want to help all the indie developers and bring the immersion and realism of these games to the next level.
Average User Rating Write A Review 0 User Reviews
6.9
19 votes
Rate
Submit
Your Rating
0