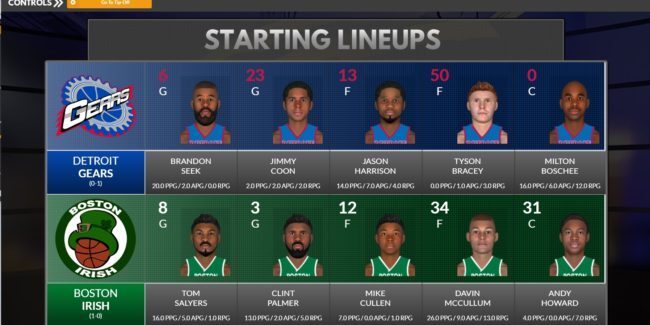 With the advent of Wolverine Studios’ latest pro basketball effort, Draft Day Sports: Pro Basketball ’20, now currently in the public beta First Access phase, I thought I should take it for a bit of a test drive. I have long championed Gary Gorski’s Michigan-based company and his development over the years has been fantastic to witness.

I have been a part of beta teams for Gorski in the past, and do have a friendly relationship with him, going all the way back to when we were both employed by .400 Software Studios.

In many cases, reviewers get a copy of the game. This happened with me last year with Pro Football ’19; however, that coincided with me getting a new job, and taking away all of my time to review the game. For this piece, which I am writing unsolicited for GM Games (I haven’t even told Chris I’m writing this), I bought the game myself. It’s good to support your local developers.

Oh, this might be somewhat of a haphazard piece, as I am merely writing about my impressions regarding the FirstAccess version of the game. Gorski has admitted that the game still needs a lot of work, given how much he has done under the hood. So, please, take this, as well as the public beta process, with an open mind and a grain of salt. Not everything will work perfectly, and some things may still change.

– The game feels smoother. I admit, my time away from the community has made me feel somewhat rusty when comparing this to previous versions. In reality, I probably should not. But the game’s transition between screens feels smoother and more…gaming professional? I don’t know how to phrase it exactly, but older versions of the game didn’t have that slick feel progressing between screens. That reminds me…

– This game is already a winner for not trapping you on a screen. In previous versions of the game, I could get trapped on a screen. That or things would layer on top of one another. I guess that’s what I mean from that gaming professional feel. The movement from each portion of the game to the next is seamless now. I don’t have parts of the screen still present as I did in games’ past. I honestly cannot recall if I had that in ’18 or ’19, but I don’t have it now. And I love it. In all actuality, I really enjoy moving from screen to screen in DDSPB20. That’s a nerdy thing to admit, but it’s true. The new “hub” screen that was touted in the first blog written about the game is a godsend to this franchise. It has taken away years of frustration with the old home screen. Huge win here.

– Even setting up your league feels more streamlined. I don’t think it truly is; in all honesty, it’s a tedious process. But it’s generally a tedious process in *any* game. I do wish Gorski were able to get the process that Markus Heinsohn has with Out of the Park, where you can type in a city and it narrows down your choices for you. I still feel like this is an area that lacks in the game, but it’s a better process than in previous games; in the past, I was generally deterred from setting up a league format I like, because the process was simply so clunky to me. Maybe it’s just me though.

– The game is so, so much cleaner than any of the past DDSPB efforts. I love the look of this game. I find the window sizing interesting; for years, I have harped on the game not being windowed. Gorski listened and tried to appease me, but it still wasn’t right, and screens wouldn’t refit to the resizing (in short, OOTP has spoiled my expectations for these sorts of things in games). This one feels more hi-def; it’s a wide screen, not tall. It stretches to the edges of the screen horizontally, but vertically, I have a few inches on either side of the screen. This has thrown me off somewhat, but honestly, I find it somewhat refreshing. Granted, I would still like my ADD-addled brain to be able to give DDSPB a fourth of my real estate, then Word a fourth and Chrome a half, so that I could write a dynasty and get distracted from writing my dynasty and not have to rearrange the screen to do either of those things.

The way Gorski has wired the game for the screen is absolutely different, but it’s sort of grown on me. I still want resizable windows that don’t lose any information. But I get that I am a selfish niche audience here (I think this audience is bigger than niche, though). I’ll take this.

– The in-game viewing is fantastic. Again, everything looks clean and fresh. I know not much has changed with this feature…but it FEELS different. That’s just as important in some cases, and seems to be quite a lot in this one. DDSPB has been pretty consistent over the years, to the point that it might have gotten stale. Not anymore. This feels like a different game. And that’s a good thing.

– I am loving the data available in the game, though I think Gorski can build upon some of it. I have made some suggestions, such as additional information posted for lineup data. I admit that I’m spoiled some by an online basketball league I participate in, using a game not offered to the public (not even league members can access it…only the commissioner, who does not own a team).

The data advancements made since I came into the league a couple of years ago has helped me better utilize basketball team data…specifically to me, lineup data. I know this is still a work in progress for the sim community, and Wolverine is no exception. But the data Gorski has incorporated, and the way it is displayed, is stunning. It absolutely enhances the game in a way only Football Manager can at this stage, I think. I look forward to what Gorski is able to add going forward.

– I have seen the new cut screen/videos put into the game. It’s a nice touch, but one with diminishing returns. You know, like virtually any cut scene in any video game. I will say that the D-League draft absolutely does not need a cut video.

Of course, none of this matters if the game doesn’t play well under the hood. But that was already pretty solid, and Gorski is always striving to improve it. (Case in point: I emailed Gorski regarding a bug I came across; within a couple of hours, he told me he was able to identify and eradicate it.) While I would love for there to be a world in which Wolverine has a competitive rival (I’m sorry, but despite Grey Dog’s Fast Break series being excellent, it has only been technically supported by members of the FOFC community, that series is dormant, at best. And I say that as a fan of Brian Nichols and what he was able to create), Gorski has been his own biggest critic and source of motivation. (I do wish Gorski would look at games in other genres, such as OOTP, for inspiration for features.)

But what Gary has done, in creating a world in which chemistry and roster construction matters, is incredible. And his changing the UI completely may very well cause me to fall in love with the game all over again.

I sincerely hope I am not alone in that regard.

John Comey
John Comey has been in the sim gaming community for nearly twenty years, and has justified his bachelors in journalism by writing close to 5,000 pages worth of content for his online leagues over the years. He has been the creator of several failed blogs, as well as a LiveJournal or two...not that there's anything wrong with that. He is also the author of the worst technical manual in gaming history (Total Pro Football). He has collaborated and contributed to products with Wolverine Studios, Grey Dog Software, and Out of the Park Developments. Comey now lives in Mystic, CT, home of the world's oldest drawbridge, as well as thousands of Long Island tourists. He is the recent target of a box-and-one defense in a 35+ basketball league. You can find Comey in social media...but good luck finding him. He thinks he has a Twitter, but is hazy on what it is, exactly.
Average User Rating Write A Review 1 User Reviews
9.2
62 votes
Rate
Submit
Your Rating
0